After nearly two decades of legal challenges against racial segregation in public schools and higher education, on May 17, 1954, the United States Supreme Court ruled in court case Brown v. Board of Education of Topeka that school segregation was unconstitutional. Their decision paved the way for desegregation of educational institutions. Before Brown v. Board of Education, legal segregation had existed under the "separate but equal" doctrine, but for the most part, the separate educational facilities and opportunities the Southern states offered to African Americans were inferior, not equal, to those for white Americans. In 1956, Virginia's General Assembly adopted a policy of "Massive Resistance," using the law and courts to obstruct desegregation.

In 1957, in the midst of Virginia’s effort to maintain segregation in public schools, James Lindsay Almond Jr., won the gubernatorial election by pledging to uphold “Massive Resistance.”  In September 1958, he closed schools in Charlottesville, Front Royal, and Norfolk rather than see them segregated. This prompted many Virginia citizens to send letters and petitions to elected officials. This letter from Ainslee B. Dohme (1905–1979) and Alvin R. L. Dohme (b. 1911), the proprietors of Cedarbrook Farm in Cedarville, to Maurice Bowen, of the Warren County Board of Supervisors, urges the board to reopen public schools that the state government had closed.

On January 19, 1959, the Virginia Supreme Court of Appeals overturned the school-closing law, the same day that the federal district court in Norfolk made a similar ruling. Almond continued to appeal these rulings, however the closed schools ultimately reopened to an integrated student body. The courts ordered the admittance of small numbers of African American students into formally all-white schools around the state. The federal government put more and more pressure on the state to integrate its schools and the Department of Health, Education, and Welfare threatened localities with loss of federal funding if they did not comply. U.S. Supreme Court decisions added to the pressure of desegregation, including Virginia’s own case, Charles C. Green et al. v. County School Board of New Kent County, Virginia.  Almond did not retreat from his unyielding stance on desegregation until early 1960, when he allowed Virginia schools to integrate, but only with token efforts that embraced passive resistance.

Analyze: Do you think this letter is effective? How would you make their point stronger?

In Their Shoes: Imagine you are a parent. What kind of letter would you have drafted if your child could not attend school?

Analyze: Why would Virginians want to keep schools segregated?

In Their Shoes: Imagine you are a student where schools are closed. Would you have been able to receive an education? If so, how? 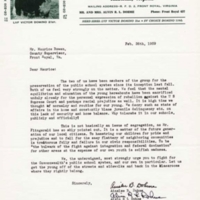