CONTENT WARNING: Materials in the Library of Virginia's collections contain historical terms, phrases, and images that are offensive to modern readers. These include demeaning and dehumanizing references to race, ethinicity, and nationality; enslaved or free status; physical and mental ability; religion; sex; and sexual orientation and gender identity.
-
After nearly two decades of legal challenges against racial segregation in public schools and higher education, on May 17, 1954, the United States Supreme Court ruled in court case Brown v. Board of Education of Topeka that school segregation was unconstitutional. Their decision paved the way for desegregation of educational institutions. Before Brown v. Board of Education, legal segregation had existed under the "separate but equal" doctrine, but for the most part, the separate educational facilities and opportunities the Southern states offered to Black Americans were inferior, not equal, to those for white Americans.

Opponents of the Brown ruling and integration used the doctrine of interposition, which argued that the state could “interpose” between an unconstitutional federal mandate and local authorities based on state sovereignty. James Jackson Kilpatrick, editor of the Richmond News Leader, vigorously criticized the court decisions to end segregation and was one of the leading public advocates of interposition. Ultimately, the General Assembly adopted a resolution of interposition in 1956, which clearly defied the authority of the federal courts. By February, with momentum building behind the segregationist movement, Byrd made a public call for "Massive Resistance" against Brown.

Analyze: Why do you think opponents of Brown v. Board of Education used the idea of interposition? Could this be used for other arguments as well?

Analyze: Why do you think people supported “Massive Resistance”? 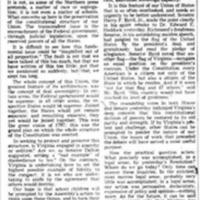 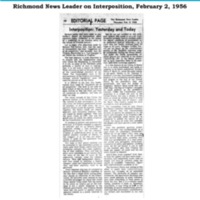