After nearly two decades of legal challenges against racial segregation in public schools and higher education, on May 17, 1954, the United States Supreme Court ruled in court case Brown v. Board of Education of Topeka that school segregation was unconstitutional. Their decision paved the way for desegregation of educational institutions. Before Brown v. Board of Education, legal segregation had existed under the "separate but equal" doctrine, but for the most part, the separate educational facilities and opportunities the Southern states offered to Black Americans were inferior, not equal, to those for white Americans. In 1956, Virginia's General Assembly adopted a policy of "Massive Resistance," using the law and courts to obstruct desegregation. In 1959, the Prince Edward County Board of Supervisors closed its public schools and later provided tax money to support private, white-only schools.

In 1957, in the midst of Virginia’s effort to maintain segregation in public schools, James Lindsay Almond Jr., won the gubernatorial election by pledging to uphold “Massive Resistance.”  In September 1958, he closed schools in Charlottesville, Front Royal, and Norfolk rather than see them segregated, regardless of the letters like this one that he received to reopen the schools. By January 1959, both the federal court and state supreme court demanded that schools be reopened and Massive Resistance laws overturned. However, Prince Edward County officials defied these court orders and on June 26, 1959, the county board of supervisors voted to cut off revenues to the public schools. Prince Edward was the only locality in the nation to take this step and they were heavily encouraged by segregationists across both the state and the South. The schools did not open on September 10th as scheduled, and they remained closed for the next five years.

Political Plans: If you were President John F. Kennedy, how would you have responded to Virginia’s reactions to Brown v. Board of Education and the policy of “Massive Resistance”?

In Their Shoes: Write a short newspaper article matching this photograph on Robert F. Kennedy’s visit to Prince Edward County. Include your opinions on Brown v. Board of Education.

Analyze: Why do you think Robert F. Kennedy visited Prince Edward County rather than somewhere else? 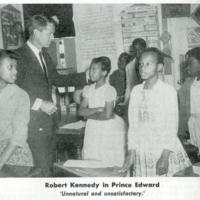 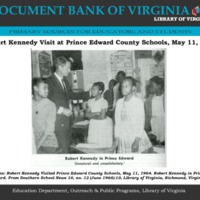