In 1957, in the midst of Virginia’s effort to maintain segregation in public schools, James Lindsay Almond Jr., won the gubernatorial election by pledging to uphold Massive Resistance. In September 1958, he closed schools in Charlottesville, Front Royal, and Norfolk rather than see them segregated. By January 1959, both the federal court and state supreme court demanded that schools be reopened, and Massive Resistance laws overturned. Almond continued to appeal these rulings, however the closed schools ultimately reopened to an integrated student body. The courts ordered the admittance of small numbers of Black students into formally all-white schools around the state. The federal government put more and more pressure on the state to integrate its schools and the Departments of Health, Education, and Welfare threatened localities with loss of federal funding if they did not comply.

The students at Lane High School in Charlottesville wrote a letter to Governor Almond in 1958 to reopen their school. They cited their rights to a public education as outlined in the state constitution and alluded to the ruling that state school be immediately reopened. They asked that control of the schools be returned to the local school board and that they be directed to reopen public schools.

Legal battles for the schools to reopen and integrate continued from 1959 to 1964. The legal cases attracted national attention. Finally, on May 25, 1964, the U.S. Supreme Court ruled in Griffin v. County School Board of Prince Edward that the county had violated the students’ right to an education and ordered the schools to be reopened.

Scan It: Scan the transcript of the speech. What words of phrases stand out to you?

Food For Thought: Imagine you were a student at this school during this time. Create a petition to Governor Almond on why you think the schools should be open and your thoughts on Brown v. Board of Education.

Social Media Spin: Create a social media post for the anniversary of the signing of the letter to Governor Almond. Be sure to include relevant details about relevant issues which support your post.

Current Connections: Do you think all students receive an equal education today in the United States? Why or why not? 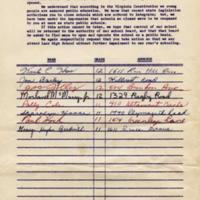 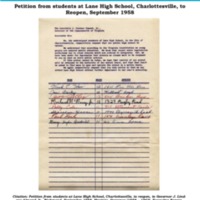