In 1919, at the National American Woman Suffrage Association’s (NAWSA) conference, President Carrie Chapman Catt proposed in her address the creation of a “league of women voters to finish the fight and aid in the reconstruction of the nation”. In 1920, just six months prior to the ratification of the 19th Amendment to the US Constitution, the National League of Women Voters (NLWV) was established in Chicago. Catt described the purpose of the NLWA as “The League of Women Voters is not to dissolve any present organization but to unite all existing organizations of women who believe in its principles.  It is not to lure women from partisanship but to combine them in an effort for legislation which will protect coming movements, which we cannot even foretell, from suffering the untoward conditions which have hindered for so long the coming of equal suffrage.  Are the women of the United States big enough to see their opportunity?” The League of Women Voters was part of the national organization and worked within the state to support the suffrage movement, advance legislative goals, and provide citizen education for all those who had the right to vote.

The League of Women Voters in Virginia is still an active organization which promotes active participation in government, educating the public on policy issues, and advocating for voter empowerment.

Look at It: Look at the poster, who might have the target audience?
What do you think is the message being sent to the audience? Why do you think this image was chosen to represent the message?

Form an Opinion: In your opinion, to what extent is this poster effective in its advocacy for voting? Would it be effective for a modern audience? Provide details and examples using your knowledge of this period in American history.


Social Media Spin: Create a post, tweet, or short video for a modern audience in which you encourage women and others to vote. Be sure to include relevant information about the importance of voting from a historical and modern perspective. 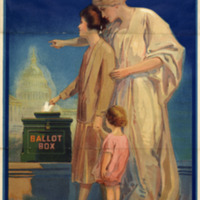 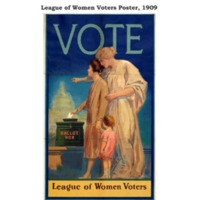