Arthur Robert Ashe was an Black tennis player and human rights activist who became one of the greatest tennis players in American history. To date he is the first and only Black man to win the singles title in three of tennis' Grand Slam events, the U.S. Open (1968), the Australian Open (1970), and Wimbledon (1975) as well as the doubles title in the French Open (1971) and Australian Open (1977).  Ashe was also the first Black male player to serve on the U.S. Davis Cup team and also as the Davis Cup captain.

Ashe was born on July 10, 1943 in Richmond, Virginia. He grew up in a segregated community and was banned from playing and practicing on the city's tennis courts, open at the time only to white players. Ashe was, however, able to refine his skills and found coaches in both Richmond and Lynchburg, Virginia. Although he was banned from competing in many elite tennis competitions that were open to whites only, his talent did not go unseen. After graduating first from his high school class, Ashe was offered a scholarship to play tennis in California at UCLA. Ashe soared in academics and athletics, and during his time at UCLA he helped his team finish first in the nation. After receiving a business degree from UCLA, Ashe joined the U.S Army and served for 2 years while still competing in professional tennis competitions.

Ashe was clear about his opposition to apartheid in South Africa. Because of this, when he applied for a visa to play in the 1970 South African Open, his visa was denied. This only encouraged him to apply repeatedly for visas and to continue to speak against apartheid. In 1973, Ashe was granted a visa to travel and play in the South African Open. He promptly won the title in doubles and finished second in the singles division.

Towards the end of his career Ashe suffered from heart problems, and he retired from tennis with an overall record (Open era) of 33 titles.

In retirement Ashe focused his efforts on humanitarian work. He also sponsored an extensive research project resulting in a three-volume history, A Hard Road to Glory: A History of the African-American Athlete.  Ashe's ongoing heart problems, however, necessitated multiple surgeries, including a blood transfusion, from which Ashe contracted the HIV virus. While he kept this information private, he decided to share it publicly before USA Today ran a story on him. Following Ashe's announcement, he concentrated his efforts on research and education regarding HIV/AIDS. His legacy includes the Arthur Ashe Institute for Urban Health and the Arthur Ashe Program in AIDS Care.

Ashe died on February 6, 1993. In his hometown of Richmond, Virginia, flags flew at half-mast, and his casket lay in state in the Executive Mansion. To honor his life and legacy, the main U.S. Open stadium in New York City is named Arthur Ashe Stadium.  In Richmond a statue is dedicated to him on historic Monument Avenue, and a major city thoroughfare has been re-named Arthur Ashe Boulevard.

Analyze: Compare and contrast Arthur Ashe's accomplishments as an athlete and humanitarian to other greats such as Althea Gibson, Jackie Robinson, and Muhammad Ali.

Social Media Spin: create 280-character summaries, including hashtags, to explain the drama and excitement of this photo. 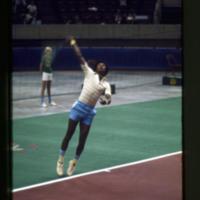 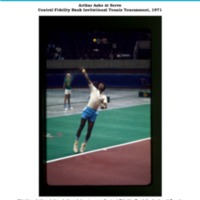