The Pentagon, located in Arlington, Virginia, is the world's largest low-rise office building and is home to the United States Department of Defense. Construction began in 1941 and was completed by 1943. On September 11, 2001, the terrorist group Al Qaeda, led by Osama Bin Laden, carried out a series of attacks on the United States. Among other sites, the Pentagon was attacked. Members of Al Qaeda hijacked American Airlines Flight 77 and flew the plane into the first floor, west wing of the Pentagon. Fortunately, Flight 77 struck the only portion of the Pentagon that had been renovated and had blast-resistant windows, structural improvements, and sprinkler systems. The ongoing renovations meant the area was only half populated, further reducing casualties. Nevertheless, upon Flight 77's impact all 58 passengers, crew members and hijackers died instantly. Inside the building, there was a death toll of 125.

A total of four flights were hijacked by 19 Al Qaeda members the morning of September 11, 2001. Each hijacked plane was a cross-country flight from the East Coast to California. Flight 11 and Flight 175 struck the two towers of the World Trade Center in New York City, and both towers fell from the impact. The White House was the third target of the Al Qaeda attack, but upon hearing of the terrorists attacks, passengers on Flight 93 fought against the hijackers and crashed the plane in a field in Pennsylvania, a 20-minute flight from the White House. Overall, the attacks resulted in a death toll of nearly 3,000 people from 93 nations.

Following the attacks, the Pentagon Renovation Program, nicknamed the Phoenix Project, set a goal to complete all reconstruction within one year of the attacks. By the first anniversary, the goal was met, and offices at the point of impact were restored and had employees working in them. Since the attacks, many memorials have been dedicated to remembering the victims and the first responders who saved so many lives.

Analyze: What are some reasons that the Pentagon was a target of the 9/11 attacks?

Artistic Exploration:  Examine the photo of the Pentagon after the 9/11 attack.  From the photo, what can you tell about the plane's angle of entry and the subsequent damage to the building?  Be specific. 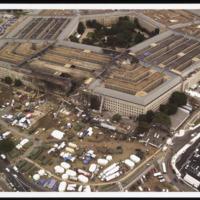 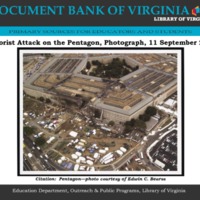