The Federal Reserve System was signed into law on December 23, 1913 by President Woodrow Wilson and was sponsored by Virginia State Senator Carter Glass. In 1914 the city of Richmond was selected to be the home to one of the 12 central bank locations and to serve the mid-Atlantic region of the United States. The first Richmond branch president, George Seay, led the movement to bring the bank to the city. He cited many reasons, such as the city’s excellent geographic location and its contributions as a leading regional banking district in Virginia. Today the Federal Reserve Bank of Richmond represents the Fifth Federal Reserve District and serves Virginia, Maryland, North Carolina, South Carolina, Washington, D.C., and most areas of West Virginia.

Since the opening of the Federal Reserve Bank of Richmond in 1914, the bank’s headquarters has had three locations in downtown Richmond. The first bank was located near the federal courts and opened in 1914. In 1921 the bank was relocated to historic Capitol Square, and operations continued there until 1978, when the bank was moved to the current  location on 701 East Byrd Street,overlooking the James River. Additional offices were opened to support the Richmond bank’s operations in Baltimore, Maryland in 1918 and in Charlotte, North Carolina in 1927. The mission of the Federal Reserve System is to “serve the public by fostering the stability, integrity and efficiency of our nation's monetary, financial and payments systems."

Compare and Contrast: How does the monetary policy set by the Federal Reserve System help or hurt everyday consumers? 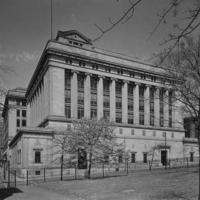 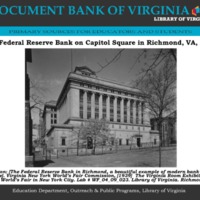