Boys and Girls! You can help your Uncle Sam,
World War I Poster, 1918

World War I required the marshaling of the resources of the United States as never before. Industries that were geared to the production of automobiles, sewing machines, etc., were shifted to the production of war materiel—guns and new weapons such as airplanes, warships, and submarines. Most of the male workforce was in uniform and deployed overseas to fight. Women went to work in those factories in greater numbers than ever before and took jobs that had been held by men.

Citation: Boys and Girls! You can help your Uncle Sam, World War I Poster, 1918, Prints and Photographs, Special Collections, Library of Virginia

Analyze: What is the message of this poster? Who is the intended audience?

Analyze: This poster reflects ideas about gender which are consistent with the times but which, today, we may find outdated. Specifically, Uncle Sam appears to have a very different relationship to the boy featured in the poster from that of the girl. What do you see, and how might you alter it for a contemporary poster on this topic? 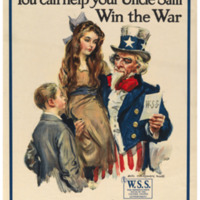 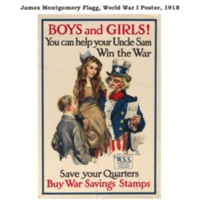