The power of the president to pardon those for offenses against the United States, with the exception of impeachment, is enumerated in the Article Two of the US Constitution. A pardon is an executive order granting clemency for a conviction of a crime. A pardon is considered to be a means of demonstrating forgiveness of a president after an individual has shown that they have accepted responsivity for their crime as part of their pardon application. Pardons do no imply that the individual is innocent of committing a crime.

One of the most controversial uses of the presidential pardon occurred when President Andrew Johnson issued sweeping pardons to thousands of former Confederate officials and soldiers after the American Civil War officially ended on April 9, 1865. The final surrender of all Confederate troops occurred on June 2, 1865.  President Johnson issued a proclamation on May 29, 1865, extending amnesty to most former Confederate officials and soldiers. Despite the term "amnesty", the move was somewhat punitive on Johnson's part. He wanted to allow the larger portions of the Confederate Army to receive amnesty while punishing those who played a more important and visible role in the Confederacy. If they qualified, the soldier had to swear a loyalty oath to the United States and free any slaves that he owned. Not all soldiers qualified under this amnesty, as it excluded fourteen "classes" of individuals. The reasons for the exclusion varied and a soldier could be disqualified if they served as a Confederate officer and were educated at the United States Military Academy or Naval Academy. Excluded soldiers could still seek amnesty, but would have to file a petition with the President.

Scan It: Scan the document for any words or phrases which indicate the purpose of the document.

Think About It: List four things you know about presidential pardons. Why are they often considered to be controversial when they are used to pardon large groups of individuals?

State Your Case: You are an attorney representing a former Confederate soldier who would like to make a petition for a presidential pardon. What would you include in the petition? Why? 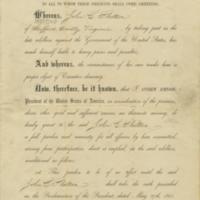