The success of Southwest Virginia's coalfields—lying in Buchanan, Dickenson, Lee, Russell, Scott, Tazewell, and Wise Counties—is inexorably linked to the expansion of railroads and to northern capital. After the Civil War, rail companies expanded westward as entrepreneurs and industrialists opened coal seams in Virginia's southwestern region. Norfolk & Western shipped its first coal from the Pocahontas Coalfield in 1883 and quickly developed lines through Tazewell to Norton. The Louisville & Nashville built into Norton and the Wise County coalfields by the 1890s. By 1900, companies developed lines that delivered coal from southwestern Virginia to piers at Hampton for shipment to both domestic and international markets. Southwest Virginia coalfields supplied high-grade coking coal to fuel the steel industry and steam coal for industrial and domestic use.

Before the boom ended in the 1920s, as many as 125 coal camps, or company towns, thrived in Southwest Virginia. The coal camps brought together, often for the first time, miners of different cultures and nationalities. To meet labor demands, mining and railroad companies advertised for and brought emigrants not only from other states, but also from Italy, Hungary, and Poland.

Analyze: Research the early coal industry. What dangers did miners face? How did the industry become a focal point for labor reform? Artistic Exploration: In Their Shoes: Research coal towns in Virginia. Write a journal entry as if you were a miner or employee at a store, such as this colliery, in the town.

Artistic Exploration:  Examine the photograph of the store.  What can you assume about how much business it may have done in the area and why?  Be specific. 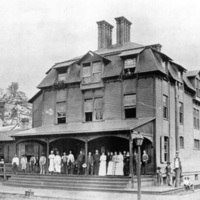 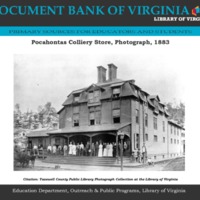