By the early 1870s, bicycles and tricycles using wire-spoked wheels were common, particularly in England. James Starley of Coventry introduced the Ariel in 1871, and, with modifications, the design gained popularity and later became known as an “Ordinary” in the 1890s. Albert A. Pope became the first American bicycle manufacturer under the trade name “Columbia” in Connecticut in 1878.

By 1899, few automobiles had been built, horses and carriages were expensive to maintain in crowded cities, and city public transportation was less than efficient in most cases. The bicycle met the need for inexpensive individual transportation, and resulted in a new industry and social change in the United States. Additionally, the bicycle affected the American perception of the automobile and its introduction into the larger American society. The bicycle proved the value of many materials and parts that were later part of the automobile industry. It also encouraged the concept of, and desire for, personalized travel.

You can also view more advertisements and political and social cartoons from Puck Magazine by visiting our Digitool collection.

Analyze: Select one cartoon image from the Puck collection in Digitool and explain how the use of the bicycle connects to the broader social or political message being addressed.

Artistic Expression: Imagine that you have to market this bicycle on behalf of the company. Draw a poster that you believe would attract the most customers possible.

In Their Shoes: Write a journal entry as if you were living in a major U.S. city in the late 19th century and how a bicycle would have affected your daily routine. 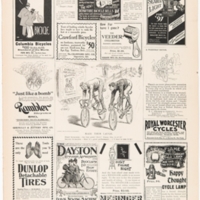