This map of Salem focuses heavily on Roanoke College which was founded in 1853 and sat on twenty acres of land within the city. Julius Dreher, Roanoke's third president, was an early leader in seeking to increase the college's internationalism. From the 1870s through the 1890s, he recruited heavily among the Choctaw in Oklahoma Territory. The first Mexican student came in 1876 and the first Japanese student in 1888. Roanoke College was the first American college or university to grant degrees to Korean students.

Roanoke County's population was approximately 2/3 white and 1/3 African-American in 1870. The principal farm products were wheat, corn and tobacco. Iron and copper ore were among the natural resources in the area.

Analyze: Research Julius Dreher. Why did he focus on internationalism at Roanoke College?

Artistic Exploration: Design a brochure for Roanoke College in the 1870s. What subjects and activities would have existed at that time based on the location and industry in the vicinity? 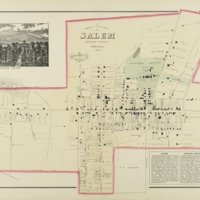 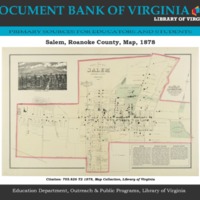