Long associated with coal mining, Southwest Virginia has an impressive list of other industries and endeavors. Salt, farming, timber, lead, tobacco, copper, gypsum, and iron have played a role in the "Mountain Empire's" industrial and economic history. The rich soil, waterways, and natural resources of southwest Virginia made it a valuable commodity to Colonial settlers, the Confederate government, and Northern industrialists.

Southwest Virginia includes the area west of Roanoke and north of the New River to the western borders of the Commonwealth. The first of the present-day counties were established in 1776 (Montgomery and Washington); however, exploration and sparse settlement pre-dated the county formations by about thirty years. The region's intensely independent early settlers came from Ireland, Scotland, Germany, England, and the Netherlands, drawn by a landscape rich in timber, wildlife, and travel paths, such as the Holston and New Rivers and Cumberland Gap.

The investment of capital by Northern businessmen following the Civil War, especially in coal mining and the railroads, brought Italians, Poles, Hungarians, Czechs, and African-Americans as cheap labor for big industry. Since the downturn in large-scale heavy industry, Southwest Virginia has turned to light manufacturing and service sector industries to remain a valuable contributor to Virginia's diverse economy.

Analyze: How did the coal mining industry affect immigration and migration in the United States, particularly Virginia? Research demographic and economic information.

Up for Debate: Research the labor movement in Virginia, particularly Southwest Virginia, and debate whether or not it helped the workers in the region included in this map. 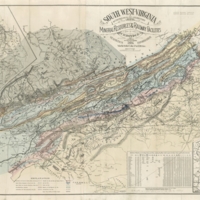 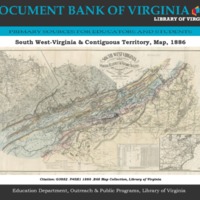