Washington County is the first known locality in the United States to be named for George Washington. It was created from Fincastle County in 1776. At the time, the county covered 600 square miles and twelve percent of the area was identified as being mountainous. As was the case with many frontier counties in Virginia, the boundaries changed over the years. In 1786, the northwestern portion of the county became Russell County. The western part of Washington County was combined with parts of Lee and Russell Counties to for Scott County.  In 1832, the northeastern part of the county was merged with Wythe County to form Smyth County. In 1890, after the independent city of Bristol was founded, the Washington County boundaries became what they are still today.

Washington County and the surrounding areas have long been known to contain important ore and mineral deposits, as indicated on the map. The natural resources include sandstone, iron ore, marble and limestone. Although mining of these natural resources has waned since the 20th century, the area has reinvented itself as a location for farming and timber. Part of Jefferson National Forest is found within Washington County.


Learn more about these resources from the Virginia Department of Mines, Minerals and Energy.

Look at It: Look at the map and the map legend. What do the colors on the map indicate? Why might have it been important for the map maker to identify these areas?

Think About It: What would motivate the need to change the boundaries of Counties like Washington County. Consider shifting demographics, population, and industrial interests in your response.

STEM STAT: Southwest Virginia was, and still is, rich in minerals and other natural resources. What makes this region such a prime location for natural resources? Use your knowledge of Earth Science and topography when answering this question. 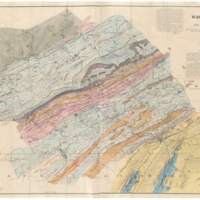 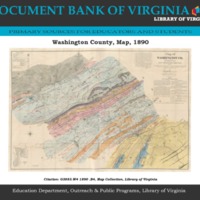