This map depicts the United States following a rapid territorial expansion due to the Louisiana Purchase. Completed in 1803, the Purchase gave the United States approximately 828,000,000 square miles of territory from French emperor, Napoleon Bonaparte. This doubled the size of the nation. The resulting Louisiana Territory stretched from the Mississippi River in the east to the Rocky Mountains in the west and from the Gulf of Mexico in the south to the Canadian border in the north. Part or all of 15 states were eventually created from the land included in the deal.  It is considered one of the most important achievements of Thomas Jefferson’s presidency.

Artistic Exploration: Print out a copy of the map and draw the borders for the states that followed Indiana in 1816 in being created from this land.

In Their Shoes: Write a journal entry as if you were a migrant setting out on the road west towards this newly available territory. 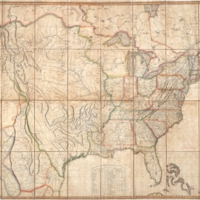 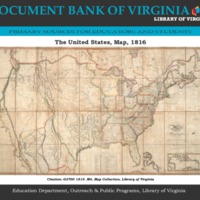