A Corn Field on a Farm, Photograph, n.d.

This photograph depicts a corn field on a farm, close to two buildings. A staple food source, corn was and still remains one of the major crops grown in Virginia. As the population increased the demand for corn also grew, bringing about the concept of industrial agriculture in the 19th century.

Industrial agriculture centers upon the fields’ owner growing or cultivating massive amounts of a single product, whether it be crops or meat production. This focused development required large amounts of man power, organization and structure, machinery, land, and of course, money. As a result many companies formed and bought up massive amounts of land so they could produce product on a large scale, resulting in cheap, plentiful produce and meat. Their production was so organized that that these companies became the agricultural equivalent of the machinery factories, prompting the term “factory farming”.

Industrial agriculture was met with no small amount of controversy. Some family farms suffered because they often could not compete with the large companies, as they could not offer the same quantity or price. Building large farms also required massive amounts of land, which caused some companies to aggressively go after land owned by farming families, American Indians, and others. Critics also pointed out that industrialized farming could severely negatively impact the environment, as growing the same product on a specific plot of land could strip it of nutrients, possibly making the land infertile.

In Their Shoes: What do you think it was like for a small farm trying to compete with a large company? Do you think that the companies had any sympathy for them? Write a paragraph from the perspective of either the small farmer or a company employee.

Current Connections: What are some of the current arguments for or against industrial agriculture? Are they sound or do they have any faults in them?

Artistic Exploration: Look closely at the photograph; what can you conclude about the cornfield and its productivity? About the uses of the two buildings? To what extent does this photograph represent a farming success or a farming struggle? Be specific. 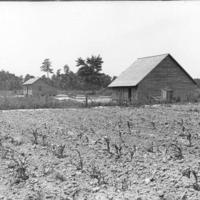 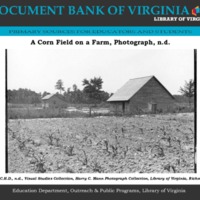