This photograph depicts a woman and a child sitting on a sofa. The woman is holding a book, presumably reading to the child.

In earlier eras books were an expensive luxury only afforded by a very few. The advent of the printing press made it easier to produce books; however, it was far easier to mass produce newspapers, pamphlets, and other ephemera. The time that went into creating a full length book made it necessary for publishers to pick and choose which books to print and what areas to cover. This caused many publishers to choose extremely specialized topics such as religion or education. As industrialization progressed it became far cheaper and easier to print a wider variety of books for a more general audience. These books were called “trade publications” and were printed by many publishers, some of which launched in the late 1800s or early 1900s.

Despite this progress in the publishing world, book prices were still too expensive for some readers. For some their literary needs would be met by the advent of pulp magazines in the 1890s, fiction magazines printed on extremely cheap wood pulp paper. This material, paired with more efficient printing presses, made these magazines very inexpensive and thus more accessible to the average person.

Analyze: How do you think the wider publication of a diverse amount of books affected Virginians and the United States? Would it make it easier for people to become educated? How did this have an effect on writers?

Artistic Exploration: Examine the photograph closely. What can you speculate about the economic status of the mother and child in the picture, and how might this have any effect on the "point" of the photograph? Be specific. 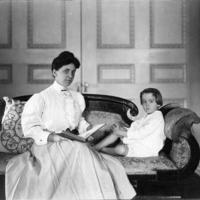 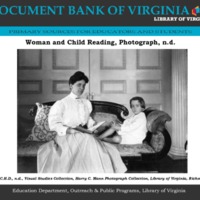