This photograph depicts a trolley conductor standing on the observation deck of one of the trolleys owned by the Washington, Alexandria, and Mount Vernon Electric Railway. Standing close to him is a man wearing a suit and hat, presumably one of the trolley passengers.

Trolleys were a very popular way for people to travel. Earlier versions of the trolley, or tram, were drawn by horses; however, by the late 1800s people began riding in trolleys that were powered by steam, steel cables, or electricity. These trolleys were a boon for passengers, as it allowed them a safe and relatively inexpensive way to travel long distances fairly quickly. This also allowed for workers to more easily obtain jobs at places that they would not have been able to reach if they had to rely on providing their own transportation.

The Washington, Alexandria, and Mount Vernon Electric Railway served the populace of northern Virginia and began transporting people in 1892. This company created the nation’s first successful electric trolley line, which ran between Alexandria and Mount Vernon. By 1896 the company had expanded their tracks and were also using tracks owned by the Belt Line Street Railway Company, which operated in Washington D.C.. Soon after railways began to expand into other portions of northern Virginia, allowing for more travel. However their expansion was threatened in the 1920s when patronage declined due to the availability of other options such as buses and personal automobiles, forcing many companies out of business.

Analyze: Why do you think people began riding buses as opposed to trolleys? Do you think that they were more reliable or inexpensive, or were there also other reasons?

In Their Shoes: What do you think it must have been like for people to have ridden an electric railway? Write a paragraph from the perspective of someone riding the railway for the first time. 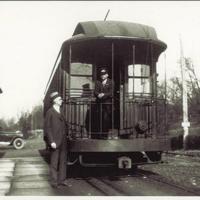 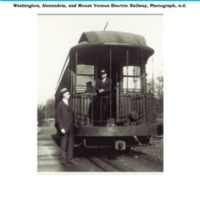