This broadside is an 1836 publication by the American Anti-Slavery Society. The broadside highlights the group’s opposition to slavery through quotations from the Bible and some of America’s Founding Documents. In the 1830s, moves were made to silence abolitionists by banning their ability to publish in the South. Countering this, the Society asserted its right to publish this broadside under the Constitutional freedoms of speech and press. This broadside looks to encourage Congress to abolish slavery in Washington, D.C. by asserting that, legally, Congress has the power over all legislation in the District. To support the position, the writer mentions how free blacks, who were citizens, were being kidnapped, placed in jail, and sold into slavery, a clear violation of their rights.

In Their Shoes: Write a broadside to support the position held in this publication.

Artistic Exploration: This broadside features a number of illustrations as well as various sizes and placement of titles and subtitles. Looking carefully at these, what insights do you gain about the broadside's intent and possible impact? Be specific. 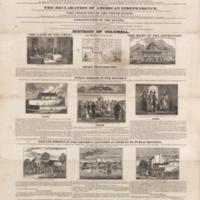 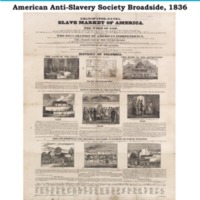