“The Age of Brass: Or the Triumphs of Woman's Rights,” Lithograph, 1869

Along with the abolition of slavery, women's rights were also a topic for reformers. The woman suffrage movement began in 1848 at the first woman's rights convention, which was held in Seneca Falls, New York, with the participants calling for political equality and the right to vote. As the movement gained more support throughout the country, it also brought about a great deal of public scrutiny. Many people, including some women, questioned how women would be able to continue completing their domestic duties in the private sphere while participating in the public sphere. Since women had always been seen as inferior to men, many people were also concerned about the implications of women gaining the right to vote and becoming one step closer to equality.

Political cartoons were often used as a medium through which to express these opinions and concerns. “Age of Brass: Or the Triumphs of Woman's Rights” depicted what might happen if women were given the right to vote. In this cartoon, a group of extravagantly dressed women are lined up at the ballot box to vote for “The Celebrated Man Tamer: Susan Sharp-Tongue” and for sheriff “Miss Hangman.” These names were meant to satirize women who were prominently involved with the suffrage movement and who would surely continue their involvement with politics after suffrage was granted. At the end of the line is a woman with strong features and dark clothes holding up her fist to a man carrying a baby, highlighting the potential affects of gender role reversal. The women are all wearing very elaborate and somewhat masculine clothing, and some are smoking cigars. The message is that if women gained suffrage, their behavior would change, and they would leave their domestic duties behind.

Analyze: Identify specific imagery in this lithograph that seeks to place women on a more equal playing field with men. To what extent are the images successful?

Current Connections: How would this lithograph be different if it were produced today for a women's rights issue? How would the imagery and message change to suit modern times?

Analyze: The caption of the cartoon is actually a pun, and the crucial word that has two meanings is brass. Some historical accounts divide history into eras that used certain metals ("age of iron," "age of brass"). To what extent does brass refer to a metal and an historical epoch? To what extent does it refer to something else? 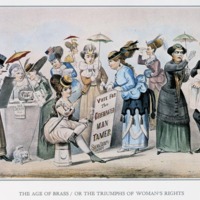 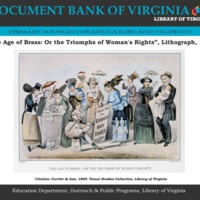