With the end of the Civil War came the end of slavery in the American South, but racial hostilities toward the formerly enslaved African Americans continued throughout the Reconstruction era. Shortly before his death, Lincoln had recommended that some African Americans be permitted to vote. Their struggle to gain and to retain full citizenship and political rights was difficult and sometimes violent. In some of the first Southern legislative sessions after the war, former slaveholders passed Black Codes that placed restrictions on the rights of freedpeople and in some places, including Virginia, were regarded as little more than slavery by a different name. In 1866 Congress proposed the Fourteenth Amendment to define freedpeople as citizens and prohibit states from denying them rights of citizenship. Congress also passed the first of several civil rights acts to guarantee those rights. One required the former Confederate states to hold conventions to write new constitutions, and the army's commanding general in Virginia ordered that African Americans be given the right to vote for and to be elected delegates to the convention. In 1867, 105,832 freedmen registered to vote in Virginia, and 93,145 voted in the election that began on October 22, 1867. Artist Alfred Rudolph Waud depicted "The First Vote" of African Americans in Virginia in the November 16, 1867, issue of Harper's Weekly magazine.

Twenty-four African Americans won election to the 1867–1868 Virginia Constitutional Convention, which created the Underwood Constitution (named for John C. Underwood, the federal judge who was president of the convention) that granted the vote to African American men but disenfranchised some former Confederates. When it was ratified late in 1869 and went into effect in January 1870, the provisions that disenfranchised former Confederates were deleted, and for the first time all adult Virginia men had the right to vote. That ended Congressional Reconstruction in Virginia. That same year, ratification of the Fifteenth Amendment to the Constitution of the United States prohibited the states from denying any man the right to vote because of his "race, color, or previous condition of servitude," meaning having been held in slavery.

Artistic Expression: Design a commemorative pin or button that could have been handed out to African Americans as they cast their first ballots. How would it differ from today's "I Voted" sticker and why?

Current Connections: What important political changes from today would you think worthy of a Harper's Weekly cover if the publication were still around today?

Artistic Exploration: Look closely at the lithograph depicting "The First Vote"; what specifically can you conclude about the three featured first voters and why? Be specific in your answers. 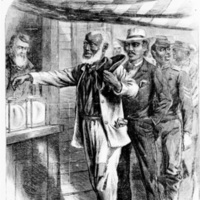 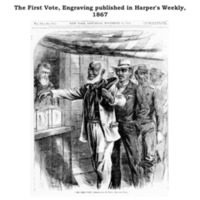