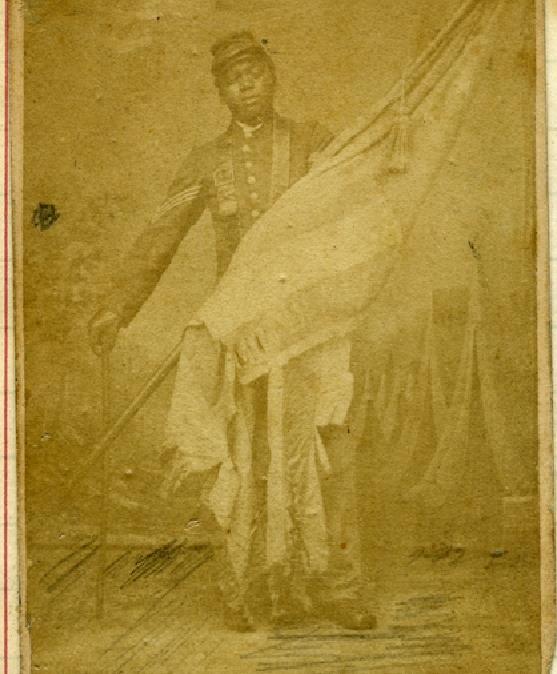 Born enslaved in Norfolk, William H. Carney (February 29, 1840–December 9, 1908) expressed an early interest in religion and attended a school run by a local minister. His father escaped during the 1850s to New Bedford, Massachusetts, and he purchased Carney and his mother out of slavery when they were not freed as promised by their owner’s will. After the Emancipation Proclamation authorized African Americans to participate in combat, Carney joined the 54th Massachusetts Volunteer Infantry Regiment, the first black military unit raised in the North.

The 54th Regiment led the charge on July 18, 1863, against Fort Wagner, one of the strongest defenses around Charleston, South Carolina. When the flag bearer was shot down in battle, Carney saved the American flag and planted it on the parapet. When the troops fell back he retrieved the flag, despite having received several serious wounds. As he handed it over to his regiment, Carney said, “Boys, the old flag never touched the ground.” He was honorably discharged in June 1864 and returned to New Bedford.

Carney worked as one of the earliest U.S. letter carriers after the war, and he frequently spoke in public about how he saved the flag. In 1897 he received a standing ovation while attending the unveiling ceremony for the Boston monument to Colonel Robert Gould Shaw of the 54th Massachusetts. After 37 years, Carney received the Medal of Honor on May 23, 1900, for his heroism during the assault on Fort Wagner. When Carney died in 1908, the U.S. flag flew at half-mast at the Massachusetts State House.