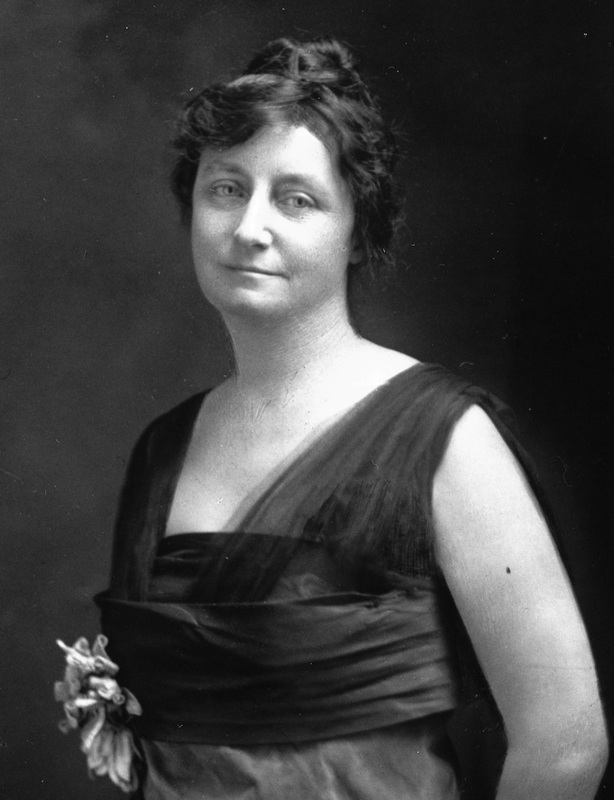 The formidable woman suffrage activist Pauline Forstall Colclough Adams (June 29, 1874–September 10, 1957) was born in Dublin, Ireland, and in 1898 settled in Norfolk, Virginia. She was an advocate of Esperanto, a constructed international auxiliary language.

On November 18, 1910, the Norfolk Equal Suffrage League was organized during a meeting at her home. Adams served as the league's first president. Unlike her fellow Virginia suffragists, she advocated a militant approach to winning the vote for women. She shunned educational activities to speak in the city's streets and march in Washington, D.C., during President Woodrow Wilson's inaugural parade. Her actions prompted a rift in the conservative Norfolk league and a reprimand from state league headquarters in Richmond. She invented two popular suffrage games (now lost), Politics and Political Auction, which were sold in Virginia and Maryland in 1913 to raise funds for suffrage work. Adams joined the Congressional Union for Woman Suffrage—a more militant group renamed the National Woman's Party in 1917—and served as president of the Norfolk branch from 1917 to 1920. She was one of thirteen picketers arrested for attempting to "flaunt their banners" in front of Woodrow Wilson's reviewing stand before a Selective Service parade on September 4, 1917. The suffragists chose prison over a $25 fine and were sent to the workhouse at Occoquan, in Fairfax County, where Adams spent time in solitary confinement deprived of her blanket, hairbrush, and toothbrush.

After passage of the Nineteenth Amendment in August 1920, Adams looked for new challenges. She passed the bar examination in 1921 and became the second woman to practice law in Norfolk. Adams remained involved in the political arena where she had fought so hard to win a place. She ran unsuccessfully for the city council and worked for the campaign of Norfolk's Sarah Lee Fain, one of the first two women elected to the House of Delegates in 1923.