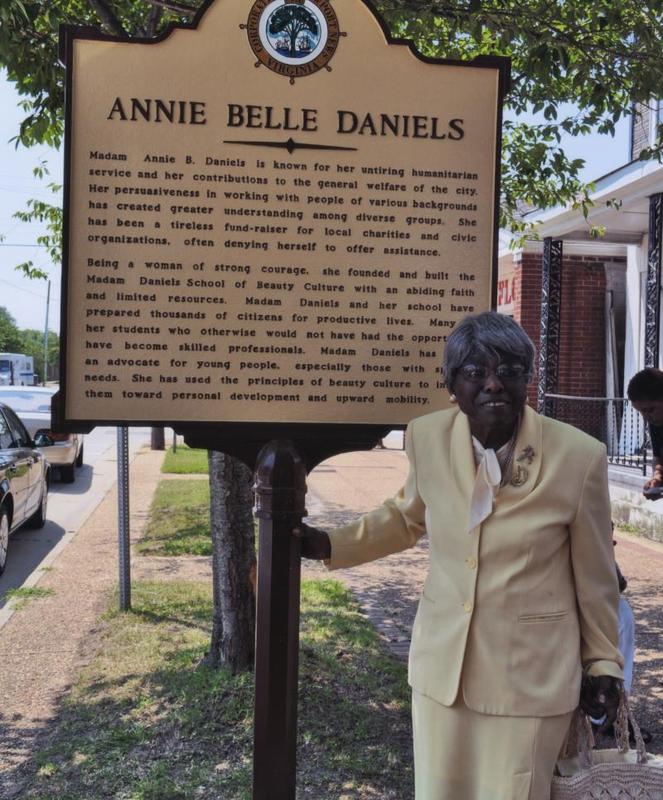 Annie Belle Daniels has parlayed her position as a businesswoman into political activism and community leadership. She grew up as one of eleven children on an Alabama farm. Inspired by African American leaders and entrepreneurs Madam C. J. Walker and Mary McLeod Bethune, she built a highly successful cosmetology business. Daniels began learning her art from local women and furthered her education at schools in Savannah, Georgia, and Newport News, where she moved in 1945. Daniels opened her own salon in 1948 and dreamed of creating a school of cosmetology. In 1959 she opened the Madam Daniels School of Beauty Culture on Chesnut Avenue and has since trained thousands of students. In June 2010, the City of Newport News dedicated a historical marker in her honor at that location, citing her "untiring humanitarian service and her contributions to the general welfare of the city."

Madam Daniels believes deeply in civic duty and has advanced the cause of social and political equality for African Americans through her work with the National Association for the Advancement of Colored People. Daniels, who grew up under Jim Crow laws and segregation, leads through hard work and by example, personally recruiting many new members for the civil rights organization, campaigning to increase voter registration, and raising funds for various political and charitable works. She has helped numerous candidates for election and volunteers as a precinct worker. Among her many awards are several from the local and national NAACP for her membership activities and leadership, a Distinguished Citizen Award from the City of Newport News (1990), and Hampton University's President's Citizenship Award (2005).