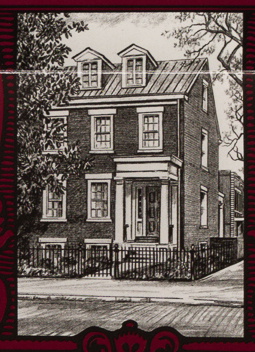 Anna Whitehead Bodeker (ca. July 26, 1826–October 26, 1904) grew up in Manchester, on the south side of the James River. She married a pharmacist and settled in Richmond's Church Hill neighborhod, where she raised a family. Reading about the women's suffrage movement in the years after the Civil War inspired her to invite prominent suffragist Paulina Wright Davis to her home in January 1870. Bodeker then helped write a "Defence of Woman Suffrage," which appeared in the Richmond Daily Enquirer in March. Two months later she founded the Virginia State Woman Suffrage Association and was elected president.

Bodeker invited Susan B. Anthony to speak in Richmond and also delivered her own speech denouncing the subordinate status of women. She was chosen by Anthony to join the National Woman Suffrage Educational Committee, which urged women to cite the 14th and 15th Amendments while attempting to vote. Rejected by election judges when she went to the polls, she instead dropped a piece of paper in the ballot box stating that "by the Constitution of the United States, I, Mrs. A. Whitehead Bodeker, have a right to give my vote at this election, and in vindication of it drop this note in the ballot-box, November 7th, 1871." She unsuccessfully petitioned the General Assembly for the right to vote in 1872. Although recognized for her dedication, Bodeker was unable to attract widespread support for the cause of woman suffrage in Virginia and the association she founded faded into obscurity.