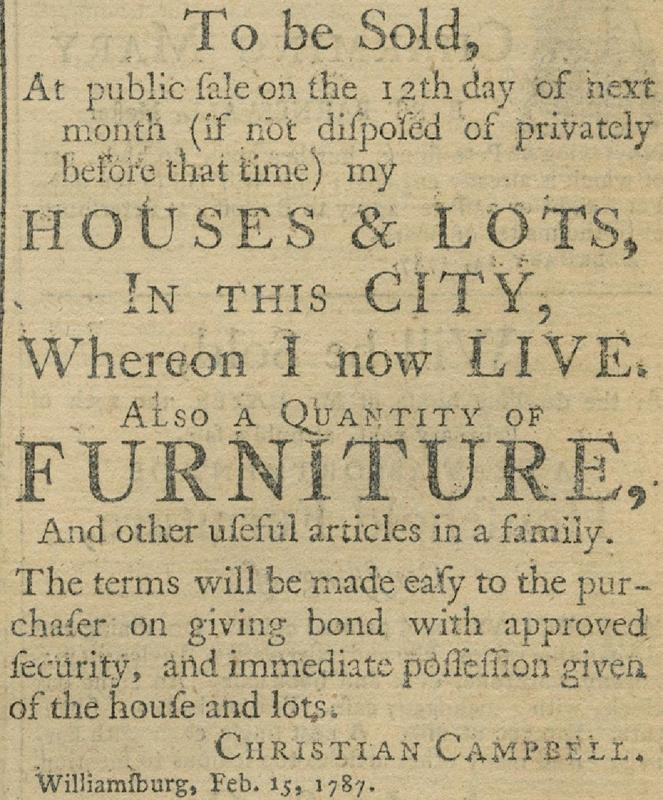 Christiana Burdett Campbell (ca. 1723–March 25, 1792) was the daughter of a Williamsburg innkeeper and the wife of an apothecary who died in Blandford, near Petersburg, early in the 1750s. Returning to Williamsburg, she began operating an inn, or tavern, about 1755. One of the most prominent taverns in the capital, it provided rooms and food for those who had business to conduct with government officials or in the General Court or who attended the regular meetings of the colony's chief merchants. When the General Assembly was in session, Campbell's tavern was one of the principal places where members of the House of Burgesses lodged. Among the legislators who stayed in Campbell's tavern were Thomas Jefferson and George Washington. Campbell advertised her tavern as providing "genteel Accommodations, and the very best Entertainment."

Several women operated taverns in colonial Virginia, some of them continuing a business after their tavern-keeping husbands had died. Campbell, however, began her own business and conducted it with success for more than thirty years. She owned as many as a dozen enslaved laborers who probably worked in the tavern. She allowed them to attend a local school for African Americans and assisted them in being baptized at Bruton Parish Church. Campbell finally closed her tavern in 1787, after the state's capital had moved to Richmond and all of the government offices had left Williamsburg. She retired to live with her daughter in Fredericksburg. Her Waller Street tavern burned about 1859, but in 1956 the Colonial Williamsburg Foundation opened a reconstructed Christiana Campbell's Tavern as a working restaurant and thus preserved her name and reputation.