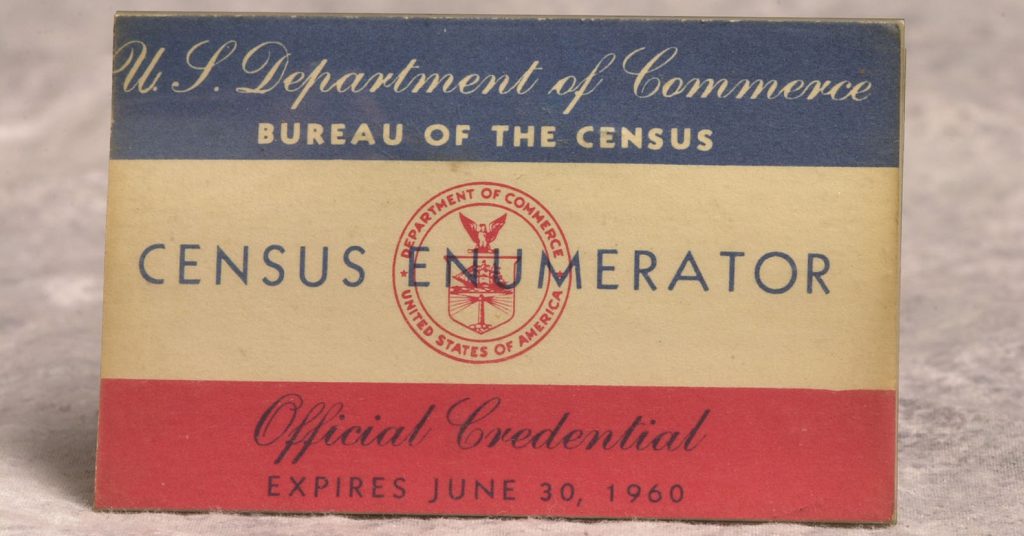 Starting in mid-July of 2020, despite many delays due to Covid-19, census takers began interviewing households who had not yet responded online or via the mail to the U.S. 2020 Census. The federal census, required by the United States’ Constitution, happens once every 10 years and each time, there are new variations in enumeration (counting) techniques and what statistical data to collect. There are processes around “how” to count and then also “what” to count; the data collected needs to be useful for governance and allocation yet also respectful of privacy and remain fair and impartial for the entire U.S. population. In 2019 and 2020, hundreds of thousands of temporary workers from local communities were hired to go out into the field as census takers as well as staff offices and provide supervision. This 22nd federal census count began in January 2020 with remote portions of Alaska, where the territory was still frozen and traversable. These employed citizens are just one aspect of how the census is truly a community event. Let’s dive into the history of the U.S. Census and also learn why this count is so important.

In 1790, the first census takers had only the original 13 states to tally. They did so on horseback and on foot and recorded the answers given from the approximate 4 million people on animal skins and parchment. At the time of the 1790 Census, the population of the five largest cities combined (New York, Philadelphia, Boston, Charleston and Baltimore) would almost fit into the largest football stadium today—Michigan Stadium in Ann Arbor, Michigan. One might imagine, as you popped onto your phone (mobile entry being an innovation for this year) and answered the few simple questions, that our 2020 census takers would be having a much easier time with their task than their predecessors. However, while accomplishing a good census count may have gotten easier in some ways, it’s evolved to be much harder in other ways. This year’s pandemic situation is just one example.

The Census Act of 1790 also established the definition of “usual residence” that has been used by every U.S. census since that time. The “usual residence” is the place where a person lives and sleeps most of the time. While the concept seems simple enough, throughout the years, special residency rules have been created to make sure each person is counted only once and in the right location. Some of these examples include college students being counted in their student housing, people temporarily displaced by natural disasters are counted at their usual home residence while those living in a shelter due to domestic violence or homelessness are counted at the shelter.

For many centuries, census takers (or enumerators as they were historically called) travelled door-to-door to interview people in their homes as they filled out their population schedules (questionnaires). Early questions only involved the “head of household” and then in 1850, each member within a household began to be counted separately. There’s an example of a big change in census goals and technique—consider just how important the switch from counting only a household via one person to counting all of the actual people inside that home, even just from a wife’s perspective? Questions were asked at this time about names, ages, gender, race, occupation, marital status, personal property values, education and place of birth. In 1900, the month and year of birth was incorporated into the schedule. Immigration questions were included that asked how many years someone had been in the U.S., whether mother or father was foreign born, year of immigration to the U.S., mother tongue, ability to speak English, and naturalization status. After significant debate, on July 11, 2019, the White House announced that the citizenship questions were not going to be included in the 2020 census. The Supreme Court had ruled against the administration’s addition of the question on June 27 and sent the issue back to lower courts. The July 11 announcement brought a final close to the debate for 2020.

In 1960, paper questionnaires began to be mailed to households. Paper questionnaires have been the main method of enumeration up until this year’s innovative online access and yet, physical enumerators are still utilized as a large task force making sure everyone even in hard-to-reach populations such as our homeless are part of the data collected. From the 2020 Census FAQ “If you don’t respond to the 2020 Census, the Census Bureau will send up to five mailings to your address and an enumerator to your door. [6] For up to six days (with the possibility of more than one contact attempt per day), an enumerator will attempt to gather census information from someone in the household. [7] After each contact attempt, the enumerator will leave a “Notice of Visit” form encouraging households to respond via mail, phone, or online. After three days of attempting to contact someone at the address, an enumerator may begin contacting neighbors to request a proxy response for the nonresponding household.”

Not unfounded reticence about sharing personal information has played a role in every census. If anything, modern concerns over privacy are heightened. (See the Supreme Court ruling above.) What should we consider as we go online or as our census takers come to us in person to record our answers to these questions? In an ideal democracy, each citizen is considered equally and vitally important as members of their larger local, state and federal communities. The purpose of a census is not to gather personal information but rather to gather statistical information and then use those aggregated anonymous statistics to help inform decisions affecting governance and fiscal allocations.

Any information asked online or by a census taker, is kept confidential for a period of at least 72 years and individuals remain anonymous amongst the statistics. The confidentiality of census records is protected by Title 13 of the U.S. Code. The law prohibits the U.S. Census Bureau from sharing personal census responses with any other government agency, court of law, or private entity for any purpose, including law enforcement. Federal law protects your confidentiality. Should a citizen need to talk with someone in person, census takers are sworn to protect their information for life and are subject to a $250,000 fine and/or up to five years in federal prison for wrongful disclosure of information. View a short video and read more about laws securing individual privacy here.

Why Do We Count?

Let’s consider now why this complete count is so explicitly necessary. The level of participation in the census, and thereby its accuracy, directly impacts local communities in a ripple that expands out from a single individual and household to affect larger systems like state economies, the federal economy, and eventually the size of the U.S. Congress.

Even back in 1790, that first census impacted the number of Representatives in Congress, raising the original 65 to 105. Today the results determine how hundreds of billions of dollars in federal funding are divided among neighborhoods and communities, affecting items such as

The cumulative effects of the census count can dramatically increase the wellbeing and personal lives of all those who live in a community. View a comprehensive listing of the services impacted by the 2020 Census here.

If you haven’t already gone online via your phone or a computer to make sure that you are counted, we encourage you to do so. This URL has a quick button to Respond as well as information about alternate ways you can complete the short questionnaire. And there is a list of all the questions that you will be asked here if you would like to read over them first. You have an important opportunity to be an outstanding citizen this year and we hope if you haven’t already jumped in, that you will get counted today!

The next federal census will occur in 2030.