After many of the regular farmhands joined the military or industrial forces in World War II, the Women's Land Army was formed in order to provide essential labor to American farms and farmers. From 1943 to 1945 the Women's Land Army recruited, trained, and placed millions of women on American farms. This program sent both rural and urban women to the farms, where they assisted in providing the necessary food products and commodities for a nation at war. This resulted in a major change in both societal roles of men and women, and in the manners in which farming had previously operated.

Inspirational, informative, instructive, imploring—posters were a major part of the war effort. Virginians would have seen many of these posters. Those most common in Virginia would have been placed in train stations asking for railroad workers or in the Tidewater area calling for experienced seamen. Other types of posters would have encouraged saving scrap materials, following restricted diets, contacting servicemen, and supporting the war effort through war bonds.

Analyze: Why do you think the women portrayed in this image look the way they do? What societal expectations/norms from the 1940s are visible here?

In Their Shoes: How would you have felt if you were recruited from the city to move to a farm and work? 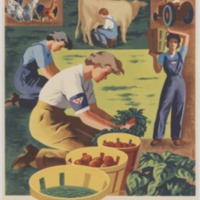 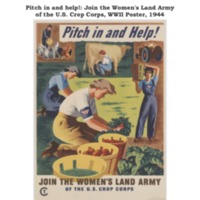