Hurricane Recovery in Tide-Water Virginia: A Partial Report on Red Cross Relief and Rehabilitation in the Area Damaged by Wind and Tidal Wave, 1933

The Atlantic hurricane season is officially from 1 June to 30 November, with the season’s peak occurring between August-October. During the very active hurricane season of 1933, the Chesapeake-Potomac Hurricane hit coastal Virginia on 23 August 1933, causing catastrophic damage.  The storm was first noticed when it was east of the Windward Islands.  By mid-August, the tropical storm was 900 miles east of Puerto Rico and within 150 miles of Bermuda. On August 23rd, the storm, now a hurricane, changed track and the eye passed over Norfolk, Virginia, and moved north.  Some of the lowest pressures ever measured in Virginia occurred with this hurricane.

Social Media Spin: Rewrite notifications of this hurricane in 280 characters or less, using hashtags, as if it was being reported on today.

Current Connections: Compare this image, and others from the blog post with coverage of Hurricane Isabel or Katrina. What differences do you see? 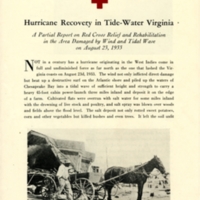 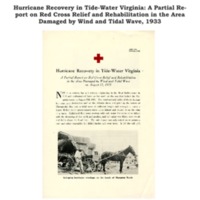 “Hurricane Recovery in Tide-Water Virginia: A Partial Report on Red Cross Relief and Rehabilitation in the Area Damaged by Wind and Tidal Wave, 1933,” Document Bank of Virginia, accessed August 11, 2020, https://edu.lva.virginia.gov/dbva/items/show/79.