The poll tax was the centerpiece of Virginia's policy of restricting the right to vote, and all other former Confederate states employed it for the same purpose. The ratification on January 23, 1964, of the Twenty-fourth Amendment outlawed the poll tax as a prerequisite for voting in federal elections. The ruling of the Supreme Court and the ruling in the 1966 Virginia case Harper v. Virginia Board of Elections declared the poll tax an unconstitutional burden on voting rights, and the federal Voting Rights Act of 1965 also outlawed requiring prepayment of the poll tax as a qualification for voting.

This photograph shows both white and black Virginians waiting in line at a registrar's office in order to register to vote on September 29, 1964. Since the Twenty-fourth Amendment was ratified earlier that year, successful registrants would be able to vote in a presidential election for perhaps the first time in their lives without having to pay a poll tax.

Artistic Exploration: Create a sign or banner that might have been displayed to either protest the poll tax or to celebrate its elimination.

Artistic Exploration: Look at the photograph of voters lined up for the City Registrar desk. What can you conclude about the seven people in the image? What does that tell you about the times and the restrictions on voter registration? Be specific.

Social Media Spin: Create a series of Tweets and hashtags that you would have used in the 1960s had Twitter been available. 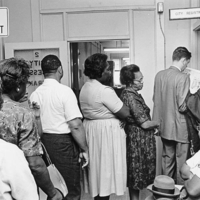 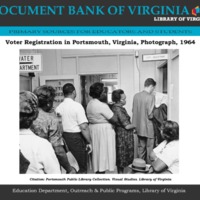