Petitions to the General Assembly were the primary catalyst for legislation in the Commonwealth from 1776 until 1865. Public improvements, military claims, divorce, manumission of slaves, division of counties, incorporation of towns, religious freedom, and taxation were just some of the concerns expressed in these petitions. Frequently, the petitions contain supplementary support documents useful in research, including maps, wills, naturalizations, deeds, resolutions, affidavits, judgments, and other items.

In colonial America, the Church of England, was the only religious denomination accepted by the British government. As early as the Jamestown era, many religious groups including Baptists, Mennonites, Quakers, Roman Catholics, and Presbyterians were present in the colonies. However, they were labeled as “dissenters” by government officials. A dissenter was a member of a non-established or unrecognized church or religion. As such dissenters were viewed as different and non- conformists. They did not enjoy the same civil and religious rights as those who were members of the Church of England. Marriages performed by clergy outside of the Church of England were not recognized as being legitimate. A religious test was often used to prevent those of other religious groups, especially Roman Catholics, from holding public office. Despite their non- status in the eyes of the government, everyone, including those deemed to be dissenters, had to pay taxes to support the Church of England. As the independence movement took hold in the colonies, the concept of religious independence grew. Political leaders in Virgnia like George Mason and Thomas Jefferson, began to share their belief that religious freedom was a natural right.

In October 1776, a petition of 125 pages sewn together and signed by nearly 10,000 people asked General Assembly to end tax payments to church establishments. The following year, the General Assembly passed the Statute of Religious Freedom which established there would be no established church supported by the government and that Christianity would not be the established religion in the colonies. Those who chose to be part of dissenter churches were free to attend religious ceremonies and teach their beliefs without any restrictions. The religious tests were eliminated which allowed men in the dissenter churches to run for and hold public or military office.

Scan It: Scan the transcription of the document. What information does it provide about the basis for the petition?

Think About It: What is significant about this petition? What made this situation unique? 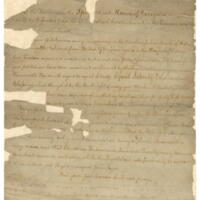 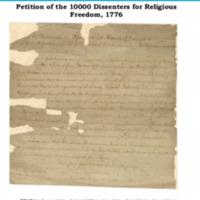 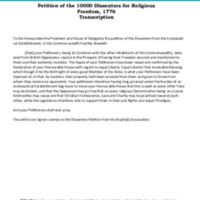