In 1918, Clinton L. Williams, the leader of the local chapter of the ACCA Shriners fraternal organization, conceived an elaborate new “temple” to house the activities and growing needs of the chapter. The Shriners, as they are known, have had a significant impact on communities around the world through their charitable works, particularly in the areas of health care and rehabilitation.

The Mosque Theater was designed by architects Marcellus Wright, Sr., Charles M. Robinson, and Charles Custer Robinson to reflect the Moorish Revival style. It took seven years of planning and two years of construction to complete the building, which cost $1.65 million (roughly equivalent to $19 million in the 21st century). It opened in 1927 with a 4,600-seat theater, 18 dressing rooms, four lounges, six lobbies, 42 hotel rooms, a gym, locker rooms, a pool, a small bowling alley, offices, and a restaurant.

In 1940, the city of Richmond bought the building from the Shriners. The building was continued to be used as a theater, but the basement was converted into a training facility for the Richmond City Police Department. In 1994, the city began restoring the theatre to its original appearance, although the interior was redesigned to include a grand ballroom, and it was renamed the Landmark Theater in 1995. In 2014, the Altria Company provided $10 million for extensive renovations and the building was renamed the Altria Theater.

Located at the west end of Monroe Park in Richmond, the theater plays host to a variety of events including Broadway shows, concerts, lectures, and school commencements.

Look at it: Look at the building depicted on the program cover. What do you think it was used for? Why?

STEM Stat: The original structure of the theater was built in the 1920s and the most recent renovation occurred in 2014. How did the science and technology in the field of architecture change in that time? How is the theater a real-world example of advancements in the architecture and the application of scientific knowledge?

Artistic Expression: The Moorish Revival style included decorative ornamentation drawn from historical sources including the arches, elaborate tile work, and carved wood. It was a popular style in the in the early 20th century. Design a new program cover for a modern audience in which you include more of these details in your depiction of the building.

Think About It: The theater was renamed several times in its history. What does this tell you about the influence of business, social, and political interests when it comes to remaining buildings? Has the way these decisions are made changed over time? Explain. 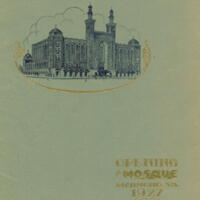 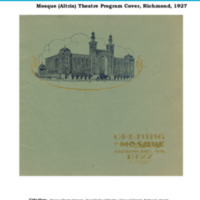