On February 1, 1960 the “Greensboro Four” sat down at the Woolworth’s lunch counter in Greensboro, North Carolina. By February 5th, hundreds of students had joined the movement to integrate the lunch counters. By the end of March, the movement had spread to 55 cities in 13 states. Many peaceful protesters were arrested for trespassing, disorderly conduct, or disturbing the peace, and the national media coverage brought increasing attention to the civil rights movement.

Virginia also saw protests to desegregate places of business that had white-only policies. On February 2, 1960, more than 200 students from Virginia Union University (one of Virginia’s Historically Black Colleges and Universities) walked from campus to Richmond's downtown shopping district. Once there, some of them entered the “whites only” Richmond Room dining area of Thalhimers Department Store, took seats at the lunch counter, and requested service. When they were refused, the students remained seated until the store closed. Two days later, 34 students entered the Richmond Room at Thalhimers, again, asking to be served at the lunch counter.  They were refused service again. When the students refused to leave, they were arrested for trespassing at the request of Thalhimers’ management. The students came to be known as the “Richmond 34”.

Susan B. Strange, a white 13 year old girl, was visiting Thalhimers with her mother when she witnessed the historic sit-in. She recorded the events in her diary, along with a news clipping from the New York Times. In 2019 she recounted her memories of the event at the time she donated this copy from her diary to the Library of Virginia.

Think About it: When a person keeps a diary or journal, what types of entries do they make? Name an event in the past year that you would include in your writing. What about that event stands out?

Be the Journalist: You are a journalist preparing to interview the president of Thalhimers in 1960. What are three questions you would ask? Why are they important?

Food for Thought: How might the events described in the document have been different five years before or after the time in which they occurred?

State your Case: Using the Virginia constitution as a basis, how might you defend the students charged with a crime during these protests? 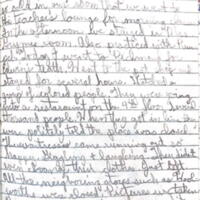 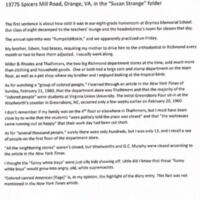 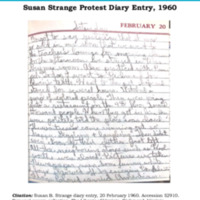 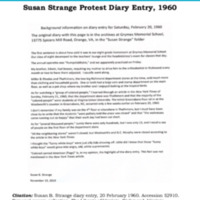