Protest of the Richmond 34 Against Segregation, 1960

In John Adams four-part plan for the country to achieve independence, first on the list was the necessity of each colony to draft its own republican form of government through creation of it's own individual constitution. The only guidelines provided by the Founders in Philadelphia was that the new state governments would provide for the happiness and safety of citizens.  Virginia, like many of the states would include a Bill of Rights, or a list of rights guaranteed to citizens. Virginia’s Declaration of Rights was ratified on June 12, 1776, twenty-seven days before its state Constitution. Today, the Virginia Declaration of Rights has been incorporated into Article I of the state Constitution and has remained an integral part of Virginia’s constitution since its introduction.

On February 1, 1960 the “Greensboro Four” sat down at the Woolworth’s lunch counter in Greensboro, NC. By February 5th, over 300 students had joined the original four in their movement to integrate the lunch counters. By the end of March, the movement had spread to 55 cities in 13 states. Many would be arrested for trespassing, disorderly conduct or disturbing the peace, but the national media coverage brought increasing attention to the civil rights movement.

On February 2, 1960, over 200 students from Virginia Union University (one of Virginia’s Historically Black Colleges and Universities) walked down Broad Street in Richmond from the Lombardy Street campus to the shopping district. Once there, they entered the “whites only” dining area of Thalhimers Department Store, took seats at the lunch counter and requested service. When they were refused, the students remained seated until the store closed. Two days later, 34 students entered the Richmond Room at Thalhimers, again asking to be served at the lunch counter.  When the students refused to leave, they were arrested for trespassing at the request of Thalhimers’ management. These students came to be known at the “Richmond 34”.

For more on the Virginia Bill of Rights https://www.virginiamemory.com/docs/VADeclaration.pdf

The beginning of the sit-in movement took place on May 28, 1963, at a Woolworth’s Drugstore in Jackson Mississippi. After watching a brief video, such as https://youtu.be/N29fnsI-GSU discuss why such an action was deemed necessary.

Be the Journalist: You are a journalist preparing to interview the president of Thalhimers, what are the three most important questions you would ask? Why are they important?

Food for Thought: How might the events described in the document have been different five years before or after the time in which they occurred?

State  Your Case: Using the Virginia constitution as a basis, how might you defend the students charged with a crime during these protests?

Real World Connection: How does a strike and/or peaceful protest that effects businesses like this lead to changes? 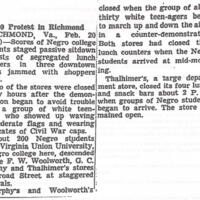 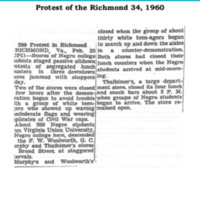