On April 2, 1917, after pledging to keep the country out of the European conflict, President Woodrow Wilson stood before Congress and issued a declaration of war against Germany. "The world must be made safe for democracy," he stated, framing the war effort as a crusade to secure the rights of democracy and self-determination on a global scale. The words spoken by President Wilson resonated with many people, who viewed the war as an opportunity to bring about true democracy in the United States. Some argued that it would be insincere for the United States to fight for democracy in Europe while African Americans had limited rights at home. "If America truly understands the functions of democracy and justice, she must know that she must begin to promote democracy and justice at home first of all," Arthur Shaw, of New York, proclaimed.

The Baltimore Afro-American, the longest running African American family-owned newspaper in the United States, used Wilson's pronouncement to frame the war as a struggle for African American civil rights. "Let us have a real democracy for the United States and then we can advise a house cleaning over on the other side of the water," they asserted. For African Americans, the war became a crucial test of America's commitment to the ideal of democracy and the rights of citizenship for all people, regardless of race.

Nevertheless, many African Americans saw the war as an opportunity to demonstrate their patriotism and their place as equal citizens in the nation. "Colored folks should be patriotic," the Richmond Planet insisted. "Do not let us be chargeable with being disloyal to the flag." More than one million African Americans responded to their draft calls, and roughly 370,000 black men were inducted into the army. Charles Brodnax, a farmer from Virginia recalled, "I felt that I belonged to the Government of my country and should answer to the call and obey the orders in defense of Democracy."

Look at It: Have students partner up or work in groups with only one able to see the poster. This person is the describer and should describe it in as much detail as possible the poster to their group/partner. They should not interpret the poster, but only state the details they see. The listeners should take notes on what they “see” and form a hypothesis of the purpose of the poster and reasons for artistic decisions.

Another Perspective: Why might some members of the African American community feel that participation in the war effort might be hypocritical? Consider the time period and the status of most African Americans early in the 20th century. 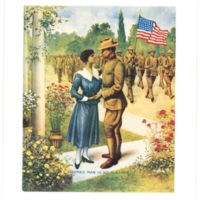 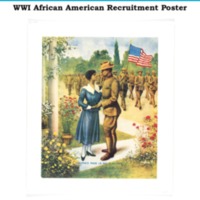