“The Age of Iron” was published by the printing firm of Currier and Ives of New York in 1869. It satirized the woman suffrage movement that was gaining widespread support in America during that time.

The woman suffrage movement began in 1848 at the first woman's rights convention, which was held in Seneca Falls, New York, with the participants calling for political equality and the right to vote. As the movement gained more support throughout the country, it also brought about a great deal of public scrutiny. Many people, including some women, questioned how women would be able to continue completing their domestic duties in the private sphere while participating in the public sphere. Since women had always been seen as inferior to men, many people were also concerned about the implications of women gaining the right to vote and becoming one step closer to equality.

Political cartoons were often used as a medium for expressing these opinions and concerns. The message of “The Age of Iron: Man as He Expects to Be” is the fear of the consequences of women gaining suffrage—their behavior would change and they would leave their domestic duties behind. As women became more involved with the public sphere and redefined their roles in the home, tension grew among those who feared what society would be like with women participating in politics.

“The Age of Iron” depicts two men, one sewing and the other doing laundry while a woman approaches a carriage driven by another woman, with a third woman on the back. Not only does this speak to the fear among men that they would be left to take care of domestic duties while women left the home, it also shows the concern that male servants would be replaced by women. Men were extremely concerned about women's challenging the idea of private and public spheres, and feared that the status of men would change dramatically if women were to gain political equality.

Analyze: Identify specific imagery in this lithograph that seeks to intimidate men. How are the women represented?

Current Connections: Think about your own home and those of older generations. Are some things still considered “women’s work” and “men’s work”? For example, who is responsible for the cooking/laundry/yard work? Who is called first when a child is injured? How can you and your generation further the cause?

Artistic Exploration: Draw or write a description of this lithograph today showing men in a women’s role while women taking something traditionally seen as male dominated. 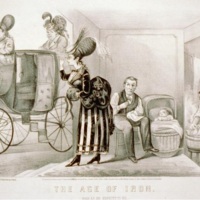 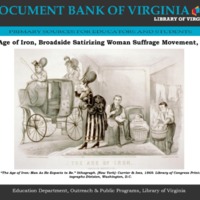