In 1716, by order from Lord Fairfax, Virginia Governor Alexander Spotswood led an expedition over the Blue Ridge Mountains into the Shenandoah Valley. Spotswood traveled with a group of gentlemen, servants, American Indians, and rangers over the Blue Ridge Mountains through Swift River Gap to arrive in the valley. This land was claimed for King George I of England. Eventually this land was divied to gentlemen through land grants. Recipients of the grants were tasked with bringing new immigrants from their home countries in Europe to this area, and were encouraged to use the land for agriculture to stimulate the economy.

Many Europeans from Germany and Scotland quickly moved to the Shenandoah Valley to take advantage of the plentiful farmland. They wanted to stake their claim in this newly discovered land since the English had already inhabited most of the farmland in the Piedmont. Page Valley is tucked away next to the Shenandoah Valley, making it an even more desirable location to live. This proximity to the water granted them access to fresh water, and also a locale in which to fish. The German and Scots-Irish culture was quickly present in architecture seen in this area.

Up for Debate: Using the facts provided by the Context section and the photograph of the Page Valley, make a case for which region would have been better for farming:  the Piedmont where the English settled, or the Shenandoah Valley where the Germans and Scots-Irish settled. Use specifics and justify your choice. 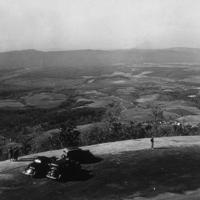 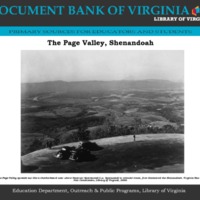