Home Rule and Local Self Government, 1914

After the Civil War, the temperance movement swept the nation. Starting with Maine in 1851, states and localities around the country held referendums to let its citizens vote whether or not to ban alcohol. In 1886, Virginia adopted the “Local Option,” which let each city or county vote to be “wet” (allowing alcohol) or “dry.” By the time this map was published in 1909, only nine cities and two counties remained wet. In 1914, Virginia held a referendum on state-wide prohibition. Campaigning was fierce on both sides. The Anti-Saloon League branch in Virginia was led by a fiery minister, Reverend James Cannon, whose stirring speeches at meetings and rallies throughout the state convinced the public that alcohol caused “pauperism and insanity and crime and shame and misery and broken hearts and ruined homes and shortened, wasted lives.”

Obvious support for the wet local option cause came from breweries, bars, and their devoted patrons. Looking to establish an organization that opposed state-wide prohibition on other grounds, a group of Richmond professional men formed the Virginia Association for Local Self- Government. Its leaders included a judge, a surgeon, and a lawyer, and several prominent businessmen. Careful to disassociate themselves from the bar scene, the Association for Local Self-Government distributed propaganda to counter the flood of literature of the Anti-Saloon League, declaring that the desire for local, not state control, was their reason to oppose prohibition.

The Virginia Association for Local Self-Government published this pamphlet in 1914, urging Confederate veterans and their sons to vote for home rule.  Harkening back to the glory days of the Civil War, the brochure drew a direct parallel between the fight for the local option and the Confederate ideal of states’ rights. Confederate soldiers “fought for the principle of self-government fifty years ago,” and today these veterans should “vote for the preservation of the right to each local community to regulate its own affairs in the manner best suited to the conditions, habits and customs of its people.” Deriding the Anti-Saloon League as an “Ohio institution” (Ohio being part of the North), the Virginia Association for Local Self-Government claimed that state-wide prohibition would “destroy a fundamental principle of government for which [the Confederates] fought.” Despite their impassioned appeal, the local option was defeated in the state-wide referendum held on September 22, 1914. Buoyed by a huge voter turnout (15 percent larger than the 1912 presidential election), state-wide prohibition won with almost 60 percent of the vote. Prohibition in Virginia went into effect on November 1, 1916. Just over three years later on January 16, 1920, the Eighteenth Amendment mandated national prohibition.

Analyze: The Virginia Association for Local Self Government compared the Local Option to the Civil War. Is this a valid argument? Do you think this idea convinced voters?

Social Media Spin: Create a 280-character summary, including a hashtag, for this brochure. 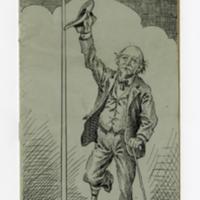 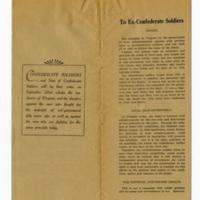 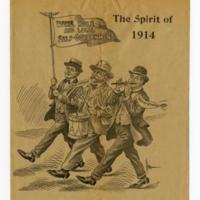 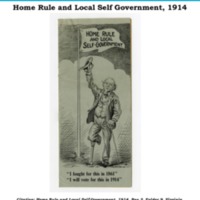 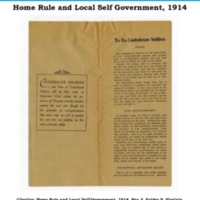 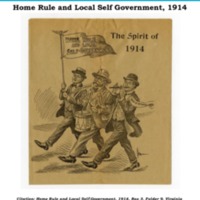