CONTENT WARNING: Materials in the Library of Virginia's collections contain historical terms, phrases, and images that are offensive to modern readers. These include demeaning and dehumanizing references to race, ethinicity, and nationality; enslaved or free status; physical and mental ability; religion; sex; and sexual orientation and gender identity.
-
After nearly two decades of legal challenges against racial segregation in public schools and higher education, on May 17, 1954, the United States Supreme Court ruled in court case Brown v. Board of Education of Topeka that school segregation was unconstitutional. Their decision paved the way for desegregation of educational institutions. Before Brown v. Board of Education, legal segregation had existed under the "separate but equal" doctrine, but for the most part, the separate educational facilities and opportunities the Southern states offered to Black Americans were inferior, not equal, to those for white Americans. In 1956, Virginia's General Assembly adopted a policy of "Massive Resistance," using the law and courts to obstruct desegregation. In 1959, the Prince Edward County Board of Supervisors closed its public schools and later provided tax money to support private, white-only schools.

It was clear that Governor Thomas Stanley, along with many other white politicians in Southside Virginia (where the powerful Byrd Organization’s political base resided) would not accept desegregation under any circumstance. Stanley created a committee to respond to the Brown decision, composed primarily of Southside politicians. This resulted in the “Gray Plan,” named after the committee’s chairman, segregationist Garland Gray, which gave the localities the choice to desegregate their schools and additionally provided legislation that would allow the localities to skirt integration if they wished.

A number of newspapers around the state addressed their views on desegregation, including the likely author of this article, Lenoir Chambers. Chambers became associate editor of the Norfolk Virginian-Pilot in 1929, where he worked closely with editor Louis Isaac Jaffé, who had just become Virginia’s first Pulitzer Prize winner for his antilynching advocacy. In 1950, Chambers became editor of the Pilot when Jaffé passed away.

Chambers became one of a small group of white southern editors who urged compliance with Brown v. Board of Education. For five years after the decision, he pushed an unrelenting editorial campaign which opposed Massive Resistance. These editorials prepared the public for eventual desegregation and peaceful integration of Virginia schools. His advocacy reached a high point in the fall of 1959 and winter of 1959, after Governor James Lindsay Almond Jr. closed Norfolk’s white secondary schools. Chambers provided leadership for pro-school forces, and the state and federal courts reopened the city’s schools in early 1959.

In Their Shoes: Write a short newspaper article with your own opinions of Brown v. Board of Education.

Analyze: What kind of effect do you think newspapers had on the public? Do you think their opinion pieces changed the minds of people in society?

Current Connections: What are some issues that the media differs on today? Do you think this is what it was like during Brown v. Board of Education?

Social Media Spin: Create a 280-character summary, including hashtags, on Brown v. Board of Education. 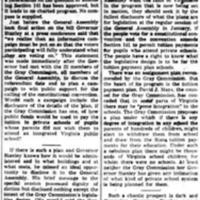 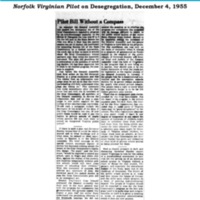