This document shows that in 1708, Ann Walker was granted permission by the government to attend the church of her choice -- the Church of England.

Prior to this Ann had experienced issues with her husband George, who was not a member of the Church of England and disapproved of Ann’s religious choice. Ann petitioned the government for permission to not only attend the church, but to also raise her children as members of her church. George countered this with a request to recognize his rights as the children’s father and head of household, which meant that he would have sole control over the children’s religious upbringing and education. The government decided that while Ann would be granted the freedom to attend whichever church she chose, George would be given control of the children’s religious education as part of “that authority over his Children that properly Belongs to Every Christian man." The only stipulation was that George would only retain control if he remained a practicing Christian.

While the Church of England was the established church during this time period, many Virginians practiced other religions and a child’s upbringing could differ greatly depending on what the family followed. Religion could be extremely divisive -- especially in the late 1700s, when entire livelihoods could be in jeopardy if someone followed the “wrong” religion.

Analyze: Considering the position of women at this time, to what extent is it consistent that a man have control over his children's lives, including religious upbringing?  Again, considering the time, why do you think children were not given a choice regarding their religious instruction?

Analyze: If the children were brought up in a different religion from their father, what do you think might be possible family and/or societal outcomes?  Why?

In Their Shoes: Imagine that you are Ann Walker and you are denied permission to attend the church of your choice. What would you do? 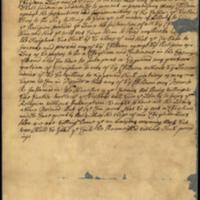 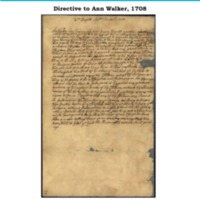 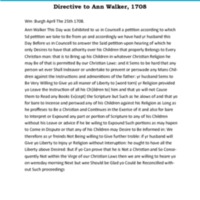