Engraving of the Burning of Jamestown, 1676

This engraving, attributed to Harry C. Mann, depicts the burning of Jamestown during Bacon’s Rebellion in 1676.

Bacon’s Rebellion was named after its leader, Nathaniel Bacon, who was an outspoken opponent of Governor Sir William Berkeley. While the most immediate and identifiable cause of the rebellion were concerns over the safety of settlers due to frequent raids by Indians, personal disputes between Bacon and Berkeley helped to further antagonize relations between the two groups. Bacon and his proponents argued that defensive measures proposed by Berkeley and the General Assembly would be ineffective and costly, and that it would be more efficient to take a more offensive approach to the matter.

His petition for a commission to create a militia was declined and Bacon chose to attack the Indians with a group of volunteers. With help from the Occaneechi, an allied Indian tribe, Bacon attacked nearby tribes and ended their campaign with the slaughter of the assisting tribe. Bacon was deemed a wanted man for his actions, which did not stop him from being elected to the House of Burgesses during this time period.

The animosity between Bacon and Berkeley’s followers culminated with Bacon’s followers attacking Jamestown and burning much of the settlement. Tensions grew so high that at one point Berkeley revealed his chest and dared Bacon to kill him, much to the horror of his on-looking followers.

Bacon died suddenly of dysentery on October 26, 1676 and although others tried to continue the rebellion, fighting essentially tapered off in the months following. Finding himself unpopular in the colonies, Berkeley sailed to England, where he died in 1677.

Analyze: How do you think Virginia history might have changed if Bacon had not led the rebellion or if he had not had personal disputes with Berkeley?

Artistic Exploration: Create your own image of the conflict between Bacon and Berkeley and/or the results of their conflicts.

In Their Shoes: Imagine you are a colonist in Jamestown at this time. Which side would you take and why?

In Their Shoes: Compose a tweet discussing the events of the rebellion from the viewpoints of Bacon’s followers, Berkeley’s loyalists, or the Occaneechi tribe. 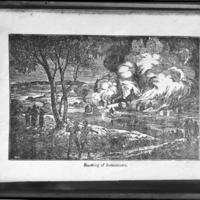 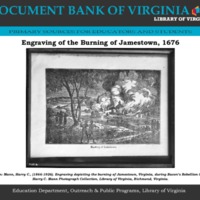