Monument Listing Names of the Members of the First General Assembly, 1619

This document is a photograph of a monument erected on Jamestown Island in 1907. It recognizes the first meeting of the General Assembly of the Virginia colony, which met from July 30 to August 4, 1619 in a church building close to the monument’s location. This particular photograph was one of several displayed at the New York World’s Fair in 1939, one of the nation’s largest world’s fairs of all time.

The General Assembly’s meeting marked the start of what the state of Virginia considers to be the oldest continuous law-making body of the New World. The assembly allowed colonists the ability to be represented by people within their colony, who would be able to voice their concerns and help influence the laws and guidelines that ruled their daily lives. It was their hope that this group, called the House of Burgesses, would help ensure that the colonies ran smoothly, thus making it more enticing to potential investors and people looking to move to the colonies. The tenacity of the blossoming governmental body would continually be tested over time as America and England went through a series of revolutions and changes.

Since its inception, the General Assembly has continued to meet every year to discuss important matters and to approve – or decline – the passing of bills into law or to strike down existing laws. The general public is welcome to attend and even speak or otherwise submit testimony during the legislative sessions to speak on pending legislation, giving them the opportunity to influence the outcome.

Artistic Exploration: If you were hired to design this monument, how would you design it differently? Who else may be included besides the General Assembly?

Current Connections: What do you think that current members of the General Assembly are discussing today? Were any of these topics discussed at the more modern Assemblies?

In Your Own Words: If you were to testify on a bill or amendment currently at the General Assembly, what types of arguments would you use to make your case? Can you think of any current or recent bills or amendments that you could speak about? 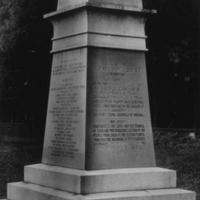 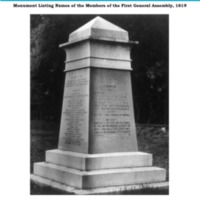