During the 1920s in America, a dramatic change in communication and entertainment occurred. Radio allowed people to connect with others across the country and eventually the world. The cover of the November 1924 issue of Wireless Age shows how new technology helped to increase production for business and industry. It helped the average person as well; those who had access to a radio could learn much about the world.

In Richmond, Virginia, WRVA made its first broadcast on November 2, 1925, from a studio in the Edgeworth Tobacco factory in downtown Richmond. Owned by Larus & Brother Company, tobacco manufacturers, the station initially operated as a community service without commercial revenue and broadcast only two nights a week. WRVA became the largest radio station in the state, thanks to the purchase of a thousand-watt transmitter from Western Electric Company. By 1929, WRVA operated a 5,000-watt transmitter and broadcast day and night daily. As an affiliate of NBC and later CBS, WRVA placed considerable emphasis on the state's regional culture, on sporting events, and on special local programming.

Artistic Exploration: Create an advertisement (print or voice) for a radio for sale to the general public in 1924. What features might you emphasize? To whom would you market the radio?

Artistic Exploration: Look at the cover art and briefly describe what "point" this 1924 magazine is making. As a side issue, to what extent do you find any irony in the sleeping white man and what he is listening to? 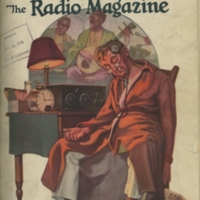 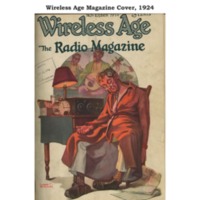