Maggie Lena Walker was an African American woman, a banker, a business leader, and a civic leader. In 1903, she was the first woman to establish a bank in the United States, the Saint Luke Penny Savings Bank in Richmond. She was also the first African American woman to become the president of a bank in the United States. Maggie Walker was born in 1864 in Richmond, Virginia.

Maggie’s mother, Elizabeth Draper, was a former enslaved person who worked as an assistant cook for Elizabeth Van Lew, a wealthy white woman who freed some of her family's enslaved laborers and who ran a Union spy network around Richmond during the Civil War. While at the Van Lew estate, Draper met an Irish American abolitionist writer named Eccles Cuthbert, who was Maggie’s biological father. There is no record suggesting that Cuthbert and Draper ever married. Draper later married William Mitchell, a butler at the Van Lew home. Together they had a son in 1870, Maggie’s half-brother Johnnie Mitchell. In February 1876, William Mitchell’s body was found drowned in the James River under suspicious circumstances. After his death, the family fell into poverty and Draper started a laundry business to support her family. In 1904, Maggie described how she felt about working in her mother’s business and witnessing the differences between socio-economic classes. She said “I was not born with a silver spoon in my mouth, but with a laundry basket practically on my head.”

Maggie went to school in Richmond at the Lancasterian School, a newly created public school for African American children in Richmond. She later graduated from the "Richmond Colored Normal School" in 1883 after she completed training to become a teacher. Following graduation she taught school for three years until she married Armstead Walker Jr., in 1886. Due to a school policy, as was standard for the time, Maggie retired from teaching once she was married.

In 1881, Walker joined the Independent Order of Saint Luke, a fraternal association. She rose through the ranks of the organization and became Right Worthy Grand Secretary in 1899. When she became its leader, the order was debt-ridden and on the verge of bankruptcy, but Walker transformed it to a well-resourced entity, and within five years the Saint Luke Penny Savings Bank opened for business. She used her position to encourage young Black students to continue their education and serve the community.

During the Great Depression, Walker's bank was survived the national wave of bank failures and merged with two other banks to become Consolidated Bank and Trust. In the later years of her life, Walker faced health issues that confined her to a wheelchair. Walker remained president of her bank until December 15, 1934, when she died from diabetic gangrene. Today Maggie Walker's former home at 110 ½ East Leigh Street is a National Historic Landmark (designated in 1979) and is maintained by the National Park Service. In her honor, a statue and plaza were also placed on Richmond's Broad Street.

Think About it: The year of the photograph was 1898, list 5 things you know about that period in American History. These items may reflect events prior to or after 1898. Think about the role of women and how the African American community in a city like Richmond, might be different from today.

Analyze: Maggie Walker achieved a level of success that was considered to be unusual for an African- American woman of her period. What events stand out to you as being most relevant to who she would become? Why? Write a paragraph explaining your thought process.

Be the Journalist: Imagine you could meet Maggie Walker now and interview her. What would you ask her? Why 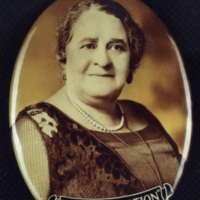 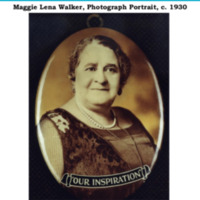