After the Revolutionary War began, Virginia began to raise a militia for defense. Baptist leaders petitioned the third Virginia Revolutionary Convention requesting permission for Baptist ministers to preach to soldiers who did not wish to attend religious services conducted by chaplains from the Church of England. Patrick Henry drafted this resolution to allow “dissenting clergymen” to conduct religious services for soldiers. By allowing its soldiers a choice in their religious services and not choosing one denomination over another, Virginia was taking a step toward the separation of church and state. 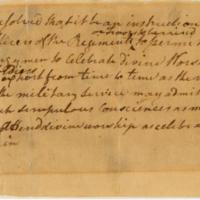 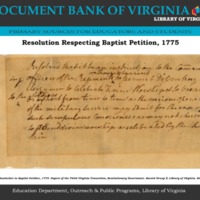