Appeal of the Women of Staunton, Broadside, c. 1910

This broadside was circulated in Staunton, Virginia, sometime between 1900 and 1919. In it, the women of Staunton asked the men in their community to vote in favor of prohibition, or the legal elimination of alcohol consumption and sale. The women pleaded with the male voters, appealing to the masculine “duty” to care for the women in their families. In stating their case, the women used their positions as wives, mothers, and protectors of the domestic sphere to give them authority. As the broadside stated, their “boys” were the people supporting the liquor business and those sons were “too precious to be sacrificed upon the altar of the saloon.” This broadside demonstrates the common concern about alcoholism and the effects that excessive drinking had on society. The women of Staunton argued that men who spent their time and money drinking in the saloons neglected to care for their families, thereby shirking their duties as men.

The Staunton broadside plays on a common theme in the prohibition movement. For much of the late nineteenth century and the early part of the twentieth century, women reformers dominated the movement. Temperance and prohibition were considered natural causes for women to champion because they involved morality and the home, women's areas of expertise and responsibility. The Women's Christian Temperance Union (WCTU) was founded in 1874 in Ohio, and prohibition was the organization's main concern. Outlawing alcohol was only one goal of the WCTU, however. Many of its members were also involved in other reform movements, including woman suffrage, which is apparent in this document. The broadside indicates that women should be permitted to vote allowing, them to “PROTECT OUR OWN HOMES AND OUR OWN BOYS.” Without the vote, women were dependent on male voters to protect home and society.

Artistic Exploration: How would you redesign this broadside for a more artistic and bold appeal? Design a poster to replace the broadside. As an extra challenge, research popular artistic styles of the time period and incorporate its distinguishing characteristics into your work.

Analyze: What other political and social movements "involved morality and the home, women's areas of expertise and responsibility" as the historical context for this document highlights? 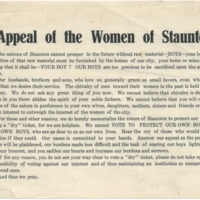 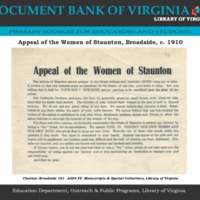