This document is a parole slip that was given to the Confederate officer Captain James M. Garnett. It is dated April 10, 1865 and noted there is its location, Appomattox Court House, VA. The day prior, April 9, 1865, Confederate General Robert E. Lee had surrendered the Army of Northern Virginia at this location. This surrender marked the end of the American Civil War in Virginia.

On April 10, 1865 Grant and Lee meet again. At this meeting it was agreed that Lee’s troops would receive these parole passes in order to allow them to travel home and obtain food at federally controlled stations in the South. There were about 30,000 of these blank passes printed. Some of the high ranking Confederate officers had them signed by federal officers, but most Confederate soldiers, like Captain Garret, had them signed by their commanding officers.

Analyze: Based on this parole slip, how would you characterize the treatment of Confederate soldiers following Appomattox?

Analyze: Why might so many thousands of parole slips had been printed? Was the Union expecting a surrender at Appomattox?

Current Connections: Using 280 characters or less, how would you articulate your parole slip? 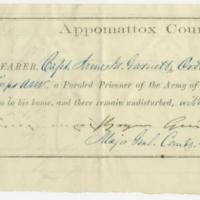