The 5-cent Battle of Gettysburg commemorative stamp is the third in a series of five stamps marking the Civil War Centennial from the U.S. Postal Service. It was first placed on sale through the Gettysburg, Pennsylvania, post office on July 1, 1963.

According to this broadside promoting its sale, "This stamp was designed by Roy Gjertson, San Pedro, California, who submitted the winning entry in a nationwide competition among professional artists. This horizontal stamp, measuring 0.84 by 1.44 inches, will be printed on the Giori presses and issued in panes of 50, with an initial printing of 120 million. To the left of the design is a Confederate soldier against a gray background; to the right a Union soldier against a blue background. All lettering is white."

View and learn more about the stamps from this era from Smithsonian National Postal Museum.

Analyze: Why do you think Gettysburg was chosen as the event for 1963? Research the other four stamps from the series. Are there events from each year of the Civil War that you think would have been stronger topics/images for the stamps?

Artistic Exploration: Design a commemorative stamp for the centennial of another American War. What symbols and color choices do you feel are important to convey the importance of the event you have chosen? 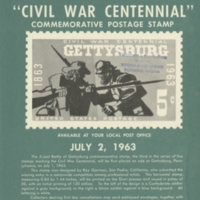 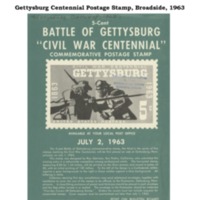