CONTENT WARNING: Materials in the Library of Virginia's collections contain historical terms, phrases, and images that are offensive to modern readers. These include demeaning and dehumanizing references to race, ethinicity, and nationality; enslaved or free status; physical and mental ability; religion; sex; and sexual orientation and gender identity.
-
In December 1814, the United States and Great Britain signed the Treaty of Ghent, ratified by Congress in February 1815, and officially ended what came to be known as the War of 1812. As part of this treaty, England agreed to "give back" enslaved peoples who had escaped or been taken by British forces to American slaveholders -- however, the British government eventually instead chose to monetarily compensate slaveholders.

Areas of Virginia on the Chesapeake Bay and along the major coastal rivers were subject to numerous British naval and land incursions, giving enslaved freedom seekers the opportunity to reach British ships and occupied areas. Slaveholders in counties such as Northumberland on the Northern Neck were considerably affected. The flow of enslaved freedom seekers increased after April 1814 when British military authorities offered Americans who deserted the opportunity to enter British military service or to be resettled to other British colonies. The British offer theoretically applied to any American, but was clearly aimed at the enslaved population. About 4,000 enslaved Black freedom seekers, primarily from coastal Georgia and the Chesapeake region, escaped into British lines. Most were resettled in Nova Scotia, and the rest were settled in Trinidad and other British colonies. Among the Trinidadian settlers were former Colonial Marines who had actively fought under arms for the British.

Analyze: Why do you think the British chose monetary compensation over actually returning enslaved peoples? 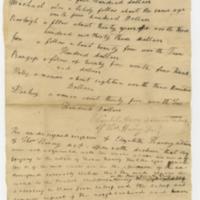 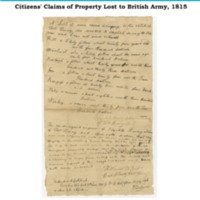